I always thought things like smoked beer, milk stouts, and Belgian Fruit Lambics were only for those who had big beards. It didn’t feel right buying them – I felt out of place and maybe a little intimidated by them.

However, after receiving a box of smoked beer for Christmas I have been getting more and more into these foreign, and intriguing styles of beer. I feel bad turning my back on Bud Light and Coors behind since they have been my best pals over the weekend since the mid-1970s.

During my ‘research’ I have been pleasantly surprised and a whole new world has opened up to me.

Since smoked beer was the first ‘trendy’ beer I was introduced to, it only feels right to start off with it in this series of beer-related posts.

What is Smoked Beer?

I am glad you asked, smoked beer is beer made from malted barley dried over an open flame.

This method of brewing beer go back to the 16th and 17th centuries where it was just easier (and about the only way) to dry and malt barley over a flame.

How is Smoked Beer Made?

Smoked beer is traditionally made by using malted barley that has been dried over an open wood fire or flame.

You can use a pellet smoker, electric smoker or even a natural gas smoker to achieve the same smoked flavor. Not csn you smoke beer, you can also smoke drinks. From espresso martinis to bloody marys.

Jump Down to Smoked Malt Recipe For Smoked Beer

The Different Kinds of Smoked Beer

As you can imagine there are a lot of different smoked beers out there. But what are the best types of beer to smoke?

Honestly, that all comes down to personal preference or the preference of the brewer who is making it.

Some of the most popular smoked beers include:

Where Can I Buy Smoked Beer?

Smoked beer is most popular in Germany where two of the original breweries still make it the old-fashioned way. These breweries are located in the small town of Bamburg Germany. The two breweries are called Schlenkerla and Spezial.

However, here in the States and throughout the rest of the beer-drinking world smoked beer is becoming more and more popular. Nowadays you can it at almost any liquor store or your favorite brewery (if not they probably have something in the works).

If you can’t find anywhere local (and you don’t want to fly to Germany), don’t stress. There are plenty of online retailers and breweries that deliver!

Like cooking with beer? Find out what my favorite beer is to use for beer can chicken so that it comes out juicy and moist!

How To Smoke Beer At Home

If you are an at-home brewer, you are in luck! You can smoke your own beer.

As mentioned above you can have any style of smoked beer – so in the recipe below, I will only be outlining the steps on how to smoke your own barley for making smoked beer. If you need a beer recipe – let me know in the comments and I will update this post to include a beer recipe too!

Depending on what type of beer you are going to be brewing will change which type of wood you will be using for the smoke.

In general, Beechwood and Cherrywood are the most common and more traditional woods to use – however, I would recommend any lighter more fruity woods for the best results. Pear

If you are using woods such as Hickory, Maple, Mesquite, Pecan or Walnut just keep in mind these are a stronger wood and will give off much more flavor. I would advise to mix one of these woods with a lighter, more fruity wood.

But at the end of the day just give it a go and experiment with whatever you can get your hands on.

– Anyway on to smoking the malt! 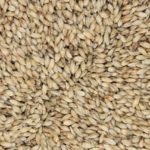