Sous vide brisket is here to change the barbecue game (thats right I said it).

When my wife added a sous vide to the kitchen collection (ever-growing),  I did a bit of research and realised it could add some delicious results to my BBQing.

I used to think, this was for the fancy-smancy Michelin star restaurants, however, this contraption helped produced the BEST brisket I’ve ever cooked.

It helped my achieve superman status with my family and friends, as it turn out bloody delicious, tender barbecue that melts in your mouth.

Convinced yet? I didn’t think so.

Let’s see how we created smoked and sous vide brisket. But first lets start with the basics, what is sous vide, and how does it work?

How Does The Sous Vide Work?

Sous vide is a French technique where food is vacuum packed into a bag and then cooked to a precise temperature in a water bath.

Sous vide has been around since the 1960’s. But it used to be an exclusive method practiced by chefs because the equipment was far too expensive. It all changed now, with entry level devices avail. Home cooks can now have their go at sous vide!

Typically when you cook on a grill or in a smoker, you need a really high temperature (usually around 400 °F) in order to be able to cook your meat.

At this temperature you can encounted the dreaded stall. This is a period of time when the temperature doesn’t increase. This leads to people having to wrap their meat in tin foil to speed up the process and avoid meat from getting dry.

Enter the magic of the sous vide!

By submerging the meat into a water bath, with the help of heater known as an immersion circulator, the water is heated to an exact temperature. This is precisely the reason why sous vide became popular, as the device won’t go over 132°F. So your food is always near perfect. 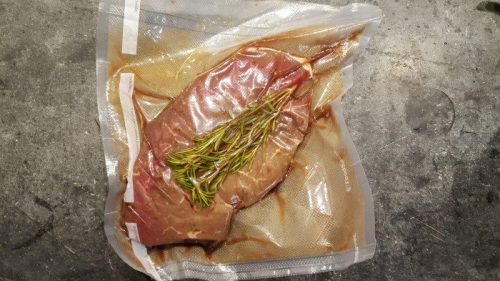 But How Do You Get The Smoky Flavor in Sous Vide Beef Brisket?

Sous vide can out preform your BBQ ten-fold. It has the slow and low approach that makes grilled and smoked meat so appealing.

You can leave the meat for hours in the water bath and let the uniform temperature loosen up the fibers and muscles in the meat, without removing the moisture. The result? juicy, tender beef.

But what about the smoky flavor of barbecue?

Yes, sous vide won’t give your food the taste you get when setting the meat on a charcoal grill, or a wood smoker.

If you leave that same brisket 12 hours in the sous vide, the constant temperature will only tenderize the brisket because there is no risk for the temperature to suddenly rise.

The Tools You Need For Sous Vide Beef Brisket

With the modernization of sous vide, we now have plenty of options. From water ovens with digital timers and internal heaters, to models that include the immersion circulator, and even ones that can be used with wifi.

You will also need bags to seal your food. While sous vide is typically used with a vacuum sealer, it isn’t essential for cooking at home, as you can use freeze safe zipper bags. If you want to, you can also buy vacuum sealed bags, that come with a hand pump to get it sealed just like if you had an at home vacuum sealer.

Ensure you have your drip pan ready for any fat drippings, after all this effort the last thing you want is flare up!

If your looking for a tasty sauce for your sous vide brisket, take the juices that drop out of the meat to turn them into a sauce!

Just take the liquid into a pan, with a bit of butter and herbs, or use a bit of flour to thicken it and turn it into a gravy, bloody delicious!

Safety When Using a Sous Vide

If you are worried about bacteria and other microbes, you can use sous vide at around 131°F, just to be safe.

In a sous vide the temperatures are significantly lower than, let’s say, using a grill. This is the ideal temperature to cook low and slow and get rid of bacteria.

Most sous vide is done between 120 °F and 130°F, but while that will kill most bacteria, there are some that are resistant to warm water, so the best way to kill them is to cook meat, poultry and pork over 131°F.

Don’t use raw onions, garlic and herbs on your sous vide, the bacteria spores they have are resistant to the sous vide temperature, so you are better off using them, in a cooking pan or before you take the meat to the grill.

If you are concerned about the use of plastic bags and heat, just make sure that your bag is made out of polyethene. Polyethene doesn’t contain BPA or bisphenol A, an industrial chemical that is used in some plastics, and that is believed to be carcinogen.

So... Does The Sous Vide Have a Future?

Sous vide is already popular in the restaurant scene, as it allows for massive amounts of food to be cooked ahead of time.

Will it be a hit at your home? Give it a try, it definitely won’t become another gadget hidden away in your cabinets.

Sous vide is an amazing technique that will tenderize even the toughest cuts of meat. Just like using smoker, you need to think ahead and give yourself plenty of time for it to cook. But if you take the time to learn the technique and use it right, you can do magic in the kitchen.

Sous vide gives us the ability to have best of both worlds. Using it we have created the most tender meat and the incredible flavors that can come out of our smoker and grill.

While sous vide is as fancy as I get, what I enjoy even more is bacon jerky, check out our households favorite way to make this delicious snack.